In her first conference speech as the Tory’s new leader in 1975, the grocer’s daughter from Grantham, Margaret Thatcher, asserted her conviction in a ‘property-owning democracy’.

Although Thatcher didn’t conceive the saying – (that credit belonged to Conservative MP Noel Skelton in 1923), it encapsulated what she thought Britain should be.

Through prudence, saving and hard work, she believed that everyday British families should be able to purchase their own homes. Thus, giving them security, self-esteem and independence and freeing them from the nanny state of local authority landlords.

Although that idea was a Labour idea initially in the mid-1970s, Margaret Thatcher introduced legislation (Right-To-Buy) in 1980 to allow local authority tenants to buy their own council homes at significant discounts. In the 1980s, homeownership boomed (although it had been on the increase for the previous two decades), and she led the country in an economy with which house buying became a national passion.

The other lesser-known fact of the Right-to-Buy legislation in 1980 was it stopped local authorities from building new council houses.

Fundamental to her idea was that government (central or local), which had built between 30% and 45% of all homes in the 1950s, 60s and 70s, should stop providing homes and let the market provide them.

A few days ago, the housing element of the 2021 Census was released, and it has shown the proportion of home ownership had fallen to its lowest level since 1985.

In the meantime, the proportion of privately rented households has surged to its highest since the late 1960s, with 20.4% of households renting from a private buy-to-let landlord.

This means the proportion of British households in private rented accommodation has more than doubled in the past two decades, from the 9.5% recorded in the 2001 census.

So, let’s look at the local stats for the Spelthorne council area.

But would it surprise you to know that even though the percentage/proportion of homeownership has dropped, the actual number of households owned has increased!

So, what explains the contradiction of reducing homeownership, yet the number of households owned has increased?

One simple reason – the number of privately rented accommodation has grown even more! 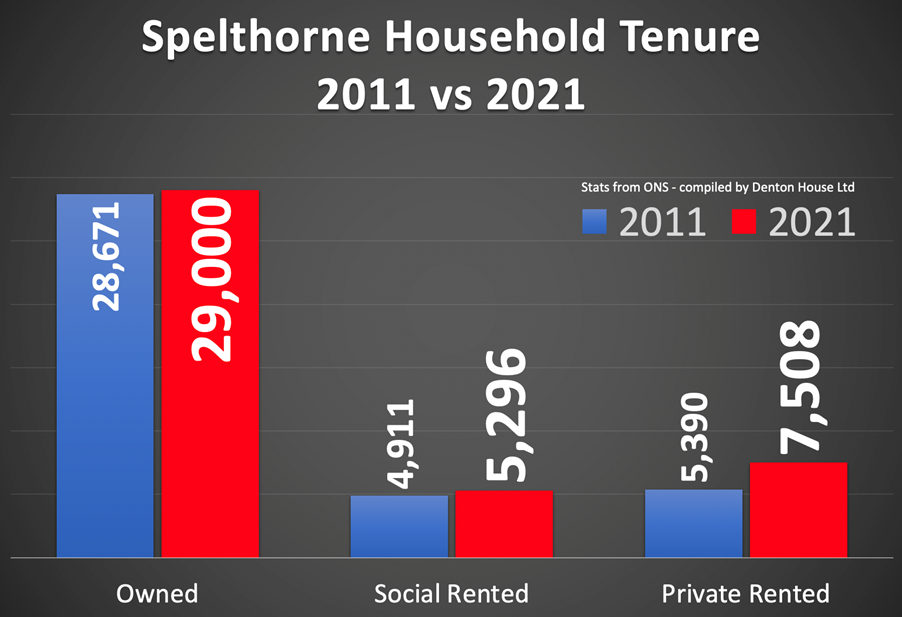 Over the coming weeks and months, I intend to drill down further into these stats nationally and locally.

Even though homeownership has increased in terms of pure numbers, the proportion of homeowners with a mortgage has dropped.

Just some headlines to whet your appetite.

So, has Thatcher’s dream been smashed?

Of course, nationally, home ownership is at the lowest level in many decades due to several factors, including the late 1980s and 2008 housing crash, negative equity, the credit crunch and increased mortgage regulation.

Yet, at the same time, as every single local authority in Britain has seen an increase in the number and proportion of private renters over the past 20 years, the entrepreneurial property-owning spirit has moved into the ownership of private buy-to-let property. The market has undoubtedly filled the housing gap that the councils and local authorities left in the 1980s.

These are interesting times, and I shall share more insights in the coming weeks and months.

Let me know your thoughts on the information above.